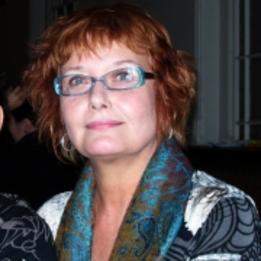 Daniel Nagrin’s performance of The Peloponnesian War inspired Lois Welk, to  pursue a career in dance.  A native of Buffalo NY, she earned a Bachelors of Arts degree in Dance at State University College at Brockport, NY where Richard Bull became her mentor.  Following graduation, Ms. Welk performed with The Workgroup, an improvisational company directed by Daniel Nagrin.  In 1972, she founded the American Dance Asylum Inc. (ADA), a producing and service organization for the performing arts.  From 1973-1979, she co-directed the ADA (then based in Binghamton, NY) with Bill T. Jones and Arnie Zane.  For more than 35 years the ADA has produced Welk’s artistic projects among them The Parking Ramp Dances, The Train Station Dance, The Carousel Dance, The Hiawatha Island Dance, The Pavilion Dance, The Twilight Zone Dance, The Lois Welk Show and most recently Moving the Music.   She was awarded a National Endowment for the Arts Choreography Fellowship in 1978.

From 1979-2007, Welk taught Dance and Creative Movement to students of all ages at 171 Cedar Arts Center (Corning, NY) and for various arts-in-education programs across New York State.

From 2003-2006, Ms. Welk served as Artistic Director of the Yard Inc., a performing artists’ colony on Martha’s Vineyard that supports the creation of new work through its residency programs.

Ms. Welk served as Director of the New York State DanceForce from 2005-2007. The NYS DanceForce, funded by the New York State Council on the Arts, is a network of organizations and individuals working to increase the quality and quantity of dance in New York.  As Director, Ms. Welk brought leadership to the re-structuring of the organization and expanded the reach of the programs to underserved rural communities.

In March 2007, Ms. Welk became Director of Dance/USA Philadelphia, a branch office of Dance/USA, the national service organization for professional dance.  She served in that capacity through March 2015, developing programs and initiatives to support the Philadelphia dance community. Currently, she is Company Representative for BalletX, Philadelphia's premier contemporary ballet company, and a member of the NYS DanceForce.